The double decker sleeper cars type BA 171 and 172 were designed for the night express hotel train concept of DACH Hotelzug AG, a joint subsidiary of DB, ÖBB and SBB, with 1st and 2nd class double decker sleeper cars. The Hotelzug (hotel train) Joint Venture consisting of Schindler Waggon AG in Altenrhein, Simmering-Graz-Pauker (SGP) in Graz, Talbot in Achen and the consortium Wagon Ausrüstung Hotelzug (KWH) was engaged to build the sleeper cars. The cars were built between 1992 and 1995 in Switzerland, Germany and Austria and were designed and approved for a maximum speed of 200 km/h in these three countries. In the cars the requirements for quiet running, comfort and ease of use for passengers were carefully balanced and realised.

On the ground floor in the middle of the car there is a plant room housing technical equipment like input transformer, throttle and parts of the air conditioning system, while the following equipment, among other things, is installed underneath the side corridor: On-board battery, battery charger, 24V fuse board, brake equipment panel, 230V and 600V fuse board, HV mounting plate, train busbar, step-up converter, inverter cooling, inverter auxiliary systems and power supply block.

Two types of car were built based on the same railcar body.

The cars, which have air-sprung bogies, offer a high level of travel comfort and have good thermal and sound insulation. There is good sound insulation between the compartments. The cars are air conditioned in accordance with UIC MB 553.

The shower and washing facilities have a pressurized water supply and temperature control at the outlet. 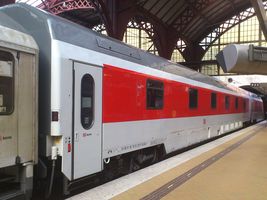 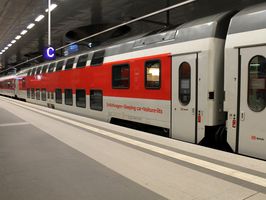 The corridor of the double-deck sleeping           Photograph: Heinz Lahs 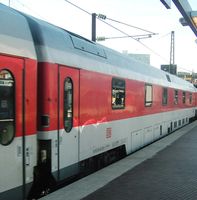 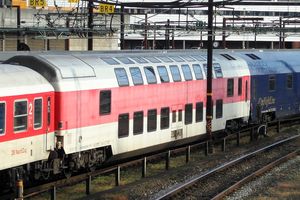 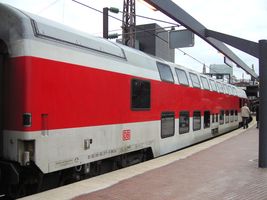